To The Hills and Back


In the month of November, my husband (Az) and I took a trip to the hills. It was our first wedding anniversary and also the first holiday together after our wedding. We chose to visit Dalhousie and Mcleodganj, including their neighbouring areas, located in the hill state of Himachal Pradesh. My parents and sisters had visited the same a month earlier and recommended the places highly. 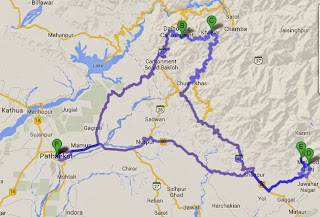 On reaching Pathankot (in Punjab) in the morning from Delhi, we took a taxi for our trip. Our driver and guide or the trip was L paaji (brother). It took us around 3 hours to reach Dalhousie. The route itself was beautiful. We made our way through serpentine roads, going around hills vegetated with gorgeous tall pine trees. It usually starts to snow in Dalhousie in the last days of November. As we were visiting in the first week of the month, it was very unlikely for us to witness snow. But I wished real hard for snow as I had never seen snow in my life. We reached dalhousie in the afternoon and L paaji left us for the day. We checked in to a hotel and chose a room on the 2nd for to get a clean view of the valley. Dalhousie is a small town with small population. It was not crowded at all and very peaceful. The weather was foggy , then sunny and then suddenly it started to rain. All in a matter of a couple of hours. And to our pleasant surprise, rainfall transformed into snowfall. My excitement knew no bounds. It was the first snowfall of the season. And I mouthed a silent thank you to the Almighty.

The next morning, we made our way to Khajjiar for sightseeing. Khajjiar is on a lower altitude than Dalhousie, but to reach it we have to cross the higher parts of Dalhousie. So even  though the snow in Dalhousie had melted away the previous evening itself, the way to Khajjiar was still covered in snow. What more could I have wanted! L paaji said that we were lucky to witness snow so early in the season. When Az told him how I was wishing for snow, L paaji asked me if I fast for any of the gods or goddesses as my wish had come true. We stopped on a spot to enjoy the snow. I wanted to taste some of it too but Az warned me against it. But I did put a bit in my mouth when he was not looking.

Khajjiar is simply spectacular. It is basically a stretch of plush lawns of natural grass, surrounded by pine hills. And there is a water body in the middle. But the clean and fresh air, the greenery all around and the sunlight makes it a gorgeous view. We spent a good couple of hours there. Then it was time to move to Mcleodganj.


We reached Mcleodganj in the late evening. Mcleodganj is basically upper Dharamshala. The next morning we went off to visit the Dalai Lama temple in the town. We were in luck as it was a Monday and His Holiness himself was present delivering his sermon. It was a sprititual experience. Then we went to see the nearby sightseeing spots of Naddi, a church, Dal Lake and Panchkula. Naddi is basically a viewpoint from where we could see the valley and snow clad mountains. The view was grand. Panchkula point is basically for trekking. Next to the Bhagsunag temple in Mcleodganj, there is a lovely waterfall known as the Bhagsunag waterfalls. Instead of walking on the pathway leading to the waterfall, Az and I chose to climb down to the river instead. It was a lovely day with clear sky, soft sunlight and cool breeze. We sat for a long time on the rocks of the rocky river.

The next afternoon, we checked out and made our way to Dharamsala. There we visited the serene Norbulingka Institute. It is a institute for the preservation of Tibetian culture. It is a whole different world inside the campus. Then we went to the Dharamsala Cricket Stadium where Az turned quite nostalgic remembering his cricketing days. It was late afternoon, it was finally time to say goodbye to the mountains and be on our way back to Pathankot to catch our train back to Delhi.


Food points:
Bon Appetit, Dalhousie: It is a small food joint specializing in chicken snacks. I had the best grilled chicken sandwich ever there.

Monga's Cafe, Dalhousie: Even though the coffee is basically CCD, the ambience of the cafe is cozy and nice.

Maggi--Enroute to Khajjiar from Dalhousie: Maggi is food of the hills it seems. Simply boiled maggi with onions, tomatoes and green chillies never tasted so good as it did near the snow covered stretch in the chilly air.

German Cafe, Mcleodganj: It is actually a makeshift food joint with pebbled floor. Cuisine of various countries is available owing to the foreign crowd. Food is great.


Bakeries in Mcleodganj: Pastry cakes of the town are quite famous and they deserve to be. A variety of cakes are available.


Fried fish, Kotla: Kotla is on the way to Mcleodganj. Here we tasted some tasty fried fresh fish with chutney. The fish is from the river which you can see behind the stalls.

In a nutshell, we had an awesome trip. The child in me was completely on loose and Az had to be on his toes all the time because of me! It felt liberating to act irresponsibly for sometime. As we drove down the hills, I devoured as much of the snow clad mountains as possible. I felt genuinely sad that our short holiday was coming to end. I was in no mood to come back home and be the responsible adult once again. After a long time I had let my hair down and enjoyed with every cell of my body. With a heavy heart I bade the mountains goodbye and made a silent promise that I shall come back to them, some other time, some other place.