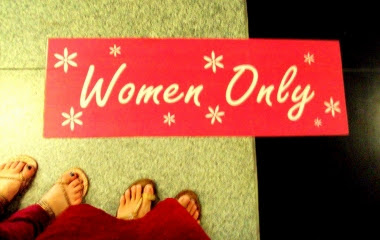 Delhi Metro is now a lifeline for the two million commuters (number of metro commuters on a weekday) of the city. In order to make women commuters feel safe and comfortable, Delhi Metro reserves one coach (the first or the last one) exclusively for ladies. This step was taken in October 2010 and a fine of 250 rupees is slapped on males who travel in these coaches.

When we were studying in Kolkata, almost a decade back, we used to travel by metro all the time. Kolkata Metro is our country's first and of course there were no seat reservations for women then. I had first traveled by Delhi Metro way back in 2006. And when I had traveled recently in the same, with my sister as the guide (she's been working in the capital since two years now), I was actually more comfortable. Thanks to the Women Only coach. 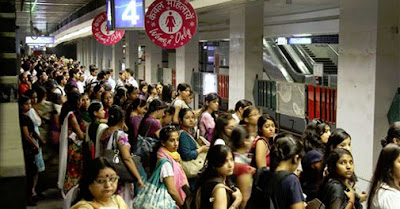 For convenience, the Women Only coaches are usually the first ones in the rail. But in one route it is the last coach. The coach is demarcated by a pink sign which says "Women Only" in white with little white flowers. The same sign stickers on the floor leads you from entry to the platform. The signs leads you to that part of the platform where the ladies coach halts, which is conveniently near the stairs/elevators. There are also overhead boards of the same sign to demarcate the platform space to be occupied by the said coach. Besides there are guards to guide and prevent chaos. 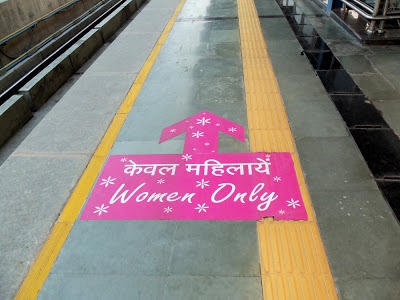 Inside the ladies coach, it is a Pink World. Inside the pink zone, with the announcement “Male passengers are requested not to travel in the first compartment which is reserved for ladies only. Doing so is a punishable offence”, played repeatedly, the women seem to get more confident and empowered. Here the chicks rule. You can see women from all walks of life--students, office goers, tourists, mothers, sisters and friends. Here you can witness the latest fashion in the city, what's in and what's out. Here you can see younger ladies giving up their seats for the older ones. You can see aunties who have just met, rambling about their life histories, making you wonder if they have known each other for life. And you can also see your spilled over male counterparts from the adjoining coach looking longingly at the empty space plus the women in the Women Only coach. But this was not the scene till recent times. 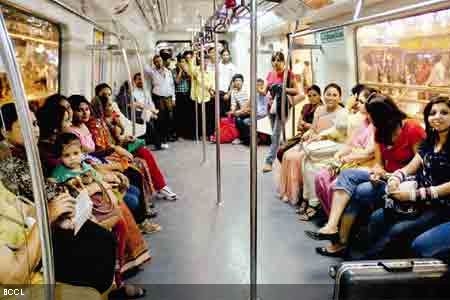 Men would on purpose travel in the Women Only coaches. And the women would look at each other, hoping that someone would raise her voice. Even if women constables came aboard and ask the infiltrators to leave, they were ignored and no fine were pressed. But since the sensations created by the recent brutal rape and murder case of a woman in the city, my sister informed, women in general have become more conscious towards fellow women. Men who stray into the compartment are literally shooed away by the women commuters. Guys are shamed and made to leave the compartment. I have also seen young guys who happily hop into vacant seats one moment, and the next moment they are seen getting up mumbling a apology like "Sorry, this is my first time", etc. But again, there are guys who get in with their girlfriends and travel with confidence.

Whatever it is, it is true that these Women Only coaches have given women peace of mind while traveling. At least while commuting they are spared the glaring eyes and "accidental" brushes of men. And in this pink zone women can literally sit back, relax and bask in the protection of womanhood.